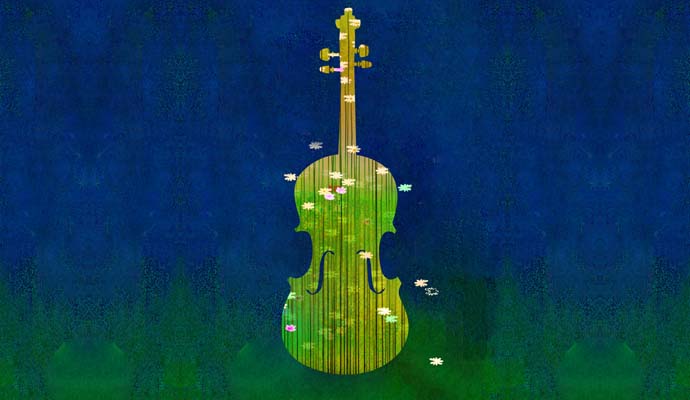 Something new and something old character our March program as we present music for string orchestra. Caroline Shaw brings an Indi-rock vibe to our opening piece. George Walker's stunning Lyric for Strings pays a profound respect to lost loves, and Grieg's suite of dances From Holberg's Time livens up some old-fashioned forms with jaunty rhythms and lyric intimacy.

Grieg's early career was spent in writing small and intimate songs to be performed for his wife, Nina, a popular singer at that time. Although critics considered her abilities somewhat limited, Grieg called her "the only genuine interpreter of my songs." For a long time he was considered best suited to these miniatures, and large-scale works were thought to be outside his range of expertise. Although he loved Nina, and enjoyed writing songs for her, he found himself in need of more substantial work to increase his income. He therefore sought commissions for larger works.

In 1884, the Norwegian government commissioned works for the bicentennial celebration of the playwright Ludwig Holberg. Holberg, who was Danish, was the first Scandinavian writer to have gained international fame, and he had lived for some years in Grieg's home city of Bergen. Grieg composed two works for the celebration. The first was a cantata for male voices based on one of Holberg's texts. It was reportedly performed in Bergen, outdoors, during terrible weather, when a statue of Holberg was unveiled. The statue is still standing but the work was poorly received and Grieg withdrew it shortly after. For his second work, Grieg chose to create a suite of piano pieces based on the dance music of Bach and other Baroque composers. A few months later he wrote to a friend that he had completed an orchestration of "the poor Holberg Suite," admitting that "it may sound quite good."

The work is in five movements, the first of which is a Prelude, full of the energy of a Baroque concerto. There is the flavor of Handel, along with some delicate folk tunes. This folk theme is carried over into the dance movements which follow. The Sarabande is a joyous interlude with contrasting solo sections. The Gavotte is a spirited dance with strong accents, linked to the Musette, which imitates a county bagpipe, complete with drone. There follows a beautiful Air, suggestive of Bach's graceful slow movements, and the work closes with a lively Rigaudon, based on a peasant dance.

Grieg modestly referred to the suite as "a peruque piece," a term referring to powdered wigs and frivolous costumes. Despite the composer's minimizing of its importance, however, Holberg Suite has remained one of Grieg's most popular works, and is a fine example of music written for and based on Grieg's experience of his beloved Norway.