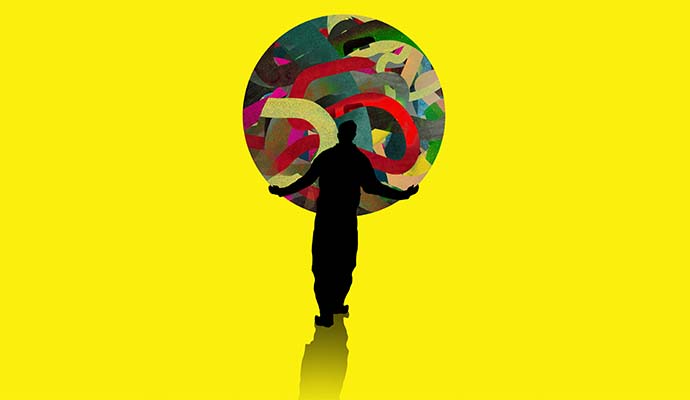 We close the orchestral season with an audience favorite. Tchaikovsky's Fifth Symphony may not be quite as famous as Beethoven's No. 5, but it is no less powerful and dramatic. If you love orchestral music, it's probably because of music exactly like this. Jennifer Higdon's Blue Cathedral imagines a journey to the afterlife in a brilliant shimmer of clouds and light, and Michael Daugherty's Tuba Concerto Reflections on the Mississippi takes us on a journey down the great American river.

It had been eleven years since Tchaikovsky had written a symphony when he composed the Symphony No. 5. His Fourth symphony had been enthusiastically received by the public at its London performance in 1878, and Tchaikovsky was feeling pleased with himself. In a letter to a friend he said, "…the unanimous opinion was that I had a veritable triumph, so that Saint Saens, who appeared after me, suffered a little because of my extraordinary success." In the years following, Tchaikovsky produced some commercially successful pieces, including the Capriccio Italien in 1880, the 1812 Overture in 1882, but between 1882 and 1888 he did more traveling than composing. He feared his muse had flown away, and said he had "not the slightest musical idea in my head!" In 1888 he finally produced the Symphony No. 5, which premiered in St. Petersburg. In the eleven years since his Fourth Symphony, he had established a reputation that carried him through periods when what he wrote was less important. The production of this new masterwork was momentous in musical terms, but its lukewarm reviews set the stage for a final period of depression from which he never really emerged. In 1891 he toured the United States, opening the new Carnegie Hall by conducting his own 1812 Overture. He was warmly received and liked the United States, but reported himself to be very homesick for Russia. He returned there, but could not shake the depression that plagued him. He aged physically beyond his years, with "knit brows, an agonized stare and heavy, despondent expression giving the impression of a man in mental torture." In this mood he wrote his last work, one of the most pessimistic pieces of music ever written, and titled the Pathetic Symphony.

Tchaikovsky's notes for the Symphony No. 5 suggest that he was pursued by personal demons. He refers to "complete resignation before the inscrutable predestination of Providence" and to "murmurs, doubts, plaints, reproaches…" The entire work deals with man's reaction to Fate, the "decrees of Providence." In the Fourth Symphony he addresses the question at an earthy level, and in the Fifth, on a spiritual plane. The course of the symphony reflects the inevitable rebellions and great mental anguish through which the composer had come to the point where he appears ready to accept the "embraces of faith." The first movement presents a Providence theme, with a strong atmosphere of hostile Fate. The emotional tension mounts through the second movement as resignation to Fate is suggested. The third movement suggests escape, with a mood that is not joyful, not sad, but more wistful in character. The "Fate" theme returns for the finale, with an attempt to convince the listener that the composer has come to terms with Providence. It is a courageous show, as though the composer is attempting to convince himself of its truth. His final concession to the inevitability of Providence is reserved for his last symphony, the "Pathetic", and the musical progression is complete.

Named one of Canada's "hottest 30 classical musicians under 30", Jarrett McCourt currently performs with the Winnipeg Symphony Orchestra, the Ann Arbor Symphony Orchestra and the Civic Orchestra of Chicago. Prior to this, Jarrett was the Tuba Fellow of the New World Symphony in Miami Beach, Florida. Jarrett's playing has been called "magnificent" by the Palm Beach Daily News and "warm, romantic and seamless" by the South Florida Classical Review. Jarrett has performed with a number of different high-level ensembles, including the Chicago Symphony Orchestra, the Detroit Symphony Orchestra, l'Orchestre Symphonique de Montreal, the National Arts Centre Orchestra and the Canadian Brass. Additionally, Jarrett has performed under classical conductors such as Michael Tilson Thomas, Valery Gergiev, Simon Rattle, Fabio Luisi, and Yannick Nezet-Seguin, as well as alongside jazz heavyweights Esperanza Spalding and Wayne Bergeron.

Jarrett has won several international competitions, including the New World Symphony Concerto Competition, the Marta Hidy Competition for Brass in Toronto, and concerto competitions across Canada and the U.S. Most notably, he won the top prize in the brass category of the Orchestre Symphonique de Montreal's Standard Life Competition in 2014, becoming the first tubist to do so in the competition's 75-year history. Additionally, Jarrett was a finalist in the XVI Tchaikovsky Competition (the inaugural year for brass participants) in St. Petersburg, Russia, and the only North American tubist to participate in the live rounds. Jarrett has performed as a soloist with the New World Symphony, the Albany Symphony Orchestra, the Windsor Symphony Orchestra, Orchestra Toronto, the University of Western Ontario Wind Ensemble and Jazz Ensemble, and the London Concert Band. During the summers, Jarrett has performed with the Verbier Festival Orchestra, the Lucerne Festival Academy Orchestra, National Repertory Orchestra, the Spoleto USA Festival Orchestra, the Aspen Festival Orchestra and the Symphony Orchestra Academy of the Pacific. Jarrett has been a guest on popular music-themed podcasts including The Brass Junkies and That's Not Spit It's Condensation, speaking largely about ways to improve one's mental health as a musician in the 21st century. In his spare time, Jarrett volunteers with the Crisis Text Line, a global not-for-profit organization providing free crisis intervention and suicide prevention via SMS message. Jarrett has also visited several colleges, universities and summer festivals to speak about mental health and suicide prevention, including the University of Akron, the University of Kentucky, Northwestern University, the University of Manitoba, the University of Windsor, the New World Symphony, and the Pokorny Low Brass Seminar. Jarrett is also a certified yoga instructor, and firmly believes in the positive effect of mindfulness on one's life.

He earned a Bachelor of Music (Tuba Performance) and a Bachelor of Arts in Philosophy from University of Western Ontario in London, Ontario in 2013 and two Masters degrees (one in Tuba Performance and the other in Chamber Music) at the University of Michigan in 2015. His principal teachers have been Brent Adams, Fritz Kaenzig, Craig Knox, Warren Deck and Gene Pokorny. Jarrett is a Miraphone and Warbuton Artist.

Daugherty: Reflections on the Mississippi