Three American composers open our season. The music from Copland’s landmark ballet, “Appalachian Spring” is paired with Samuel Barber’s short but dramatic First Symphony. And the mid-west premiere of a new violin concerto, “The Rose of Sonora” promises to charm with its western setting and adventurous plot.

Aaron Copland's ballets show his commitment to musical precision wedded to dramatic action and choreography. He described himself as having a "split personality" when it came to composing, and to this split personality we owe impressive movie scores, as well as some of the most delightful light symphonic music of modern times. In his writing he has used folk songs, cowboy ballads, country dances, Shaker hymns, jazz syncopation, as well as traditional composition, to produce a body of work which still enjoys great popularity. In 1924 a conductor actually apologized to an audience for the dissonance of an early Copland composition. A few years later, some patrons of the Boston Symphony left the hall to escape the "hot jazz" of Copland's Piano Concerto. Subsequent works were described by critics as "ugly, uncouth, mocking, audacious and sulphurous." Copland was not discouraged, and in fact appeared to enjoy his reputation as a shocking modernist. In the late 1930's he began receiving film and ballet commissions and was brilliantly successful in this vein. He found that his continuing wish to compose in a uniquely American style could be satisfied by producing what he described as "more accessible" works. He said, "I had not so much the intention of writing a more popular music as writing music that would communicate with a broader audience."

Out of this trend came Appalachian Spring. Copland had known and admired Martha Graham, the choreographer, for many years. In the early 1930s Martha began exploring America's past in her work, and in 1944 Copland and Graham collaborated on the conception of Appalachian Spring. While composing the piece, Copland used the working title Ballet for Martha, which later became the ballet's subtitle. The entire score is steeped in American myth and folklore. The title Appalachian Spring was given to the work by Martha Graham, and comes from a line in a poem by Hart Crane called "The Dance". According to the explanatory notes in the score the ballet is "a pioneer celebration in spring around a newly-built farmhouse in the Pennsylvania hills in the early part of the last century." The bride-to-be and her young farmer act out the emotions of their new domestic partnership. They receive advice from an older neighbor and a revivalist and his followers, and at the end the couple are left "quiet and strong in their new house."

Copland devised at least five versions of Appalachian Spring for different purposes, and himself recorded the revised complete score for chamber group in 1973. The fully orchestrated version was released in 1991, but today's critics apparently prefer the chamber score, which conveys the feeling of warmth, simplicity, and sense of order that was closest to Copland's original intention.

"The Rose of Sonora is first and foremost a violin concerto. One of the most significant aspects of it to both Holly and me is that it be accessible to and engaging for today's audience.

Prior to each scene being performed, a description of what is happening in that scene will be projected on a screen above the orchestra or read by a narrator. Inspired by the scene descriptions and the music they are hearing, by the end of the concerto, each member of the audience will have created his or her own 'mental movie' of The Rose Of Sonora." 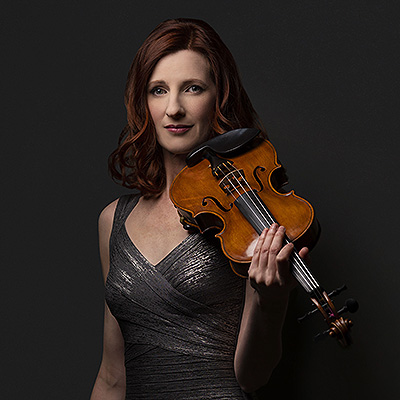 As an in-demand performer, Holly balances her orchestral duties with numerous concerto performances around the country. Passionate about performing living American composers' works, Holly has been featured as soloist for concertos by Jennifer Higdon, Jim Stephenson, Philip Glass, and now a concerto being written for her by Hollywood film composer, George S. Clinton. This new concerto, The Rose of Sonora: a violin concerto in five scenes, is inspired by true stories about the lives of legendary women in the Old West and will take the listener on an epic western adventure of love and revenge. The world premiere performance will be in April 2019.