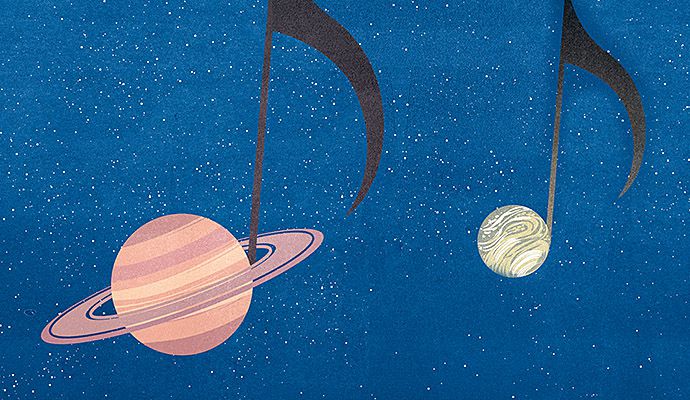 Our season kicks off with one of the greatest orchestral showpieces ever written. Journey throughout the solar system as Gustav Holst introduces you to Roman Gods through seven distinct movements, each one a miniature masterpiece. Before that, our fiddles will ‘rosin up their bows’ and we make our first visit with the music of Conni Ellisor, as we bring a mountain dulcimer to share our stage for the first time ever.

When first asked if I would be interested in writing a concerto for dulcimer and strings, I happily agreed because the challenge of juxtaposing and blending musical styles and idioms has always been of interest to me.

Composed between 1914 and 1916, The Planets is a suite of seven movements. Holst said that the work has no connection with the deities of classical mythology. His focus was more on the astrological and psychological association each planet presents.

Stephen Seifert's teaching and playing have made him a favorite with dulcimer players all over the country since 1991. In that time, he's been a featured performer at close to a thousand dulcimer festivals and other music events including Kentucky Music Week in Bardstown, KY, Dulcimerville in Black Mountain, NC, the Augusta Heritage Center in Elkins, WV, the John C. Campbell Folk School in Brasstown, NC, the Ozark Folk Center in Mountain View, AR, Stringalong near Milwaukee, WI, the Walnut Valley Festival in Winfield, KS, The Tono American Music Festival, in Tono, Japan, and Halsway Manor near Crowcombe, Somerset, UK.

Stephen was dulcimer soloist with the Nashville Chamber Orchestra starting in 1996 and is featured on their Warner Classical recording of Conni Ellisor's Blackberry Winter, a concerto for mountain dulcimer and string orchestra written with consultation from the great David Schnaufer. The piece continues to be in regular rotation on many classical stations around the U.S. (The recording album is titled "Conversations in Silence" and can be sampled and purchased on iTunes.)

The world's foremost concert dulcimer player, Stephen has performed Blackberry Winter with the Charlotte Symphony Orchestra, the Tucson Symphony Orchestra, the Montpelier Chamber Orchestra, and many others. He's also performed the piece with renowned organist Wilma Jensen who arranged it for organ and dulcimer. His orchestral repertoire also includes a second concerto from Conni Ellisor titled Broad Band of Light, and two concertos from composer Mark Steighner.

Stephen was Adjunct Instructor of Mountain Dulcimer with David Schnaufer at Vanderbilt's Blair School of Music from 1997 to 2001. He also taught, performed, and recorded with Mr. Schnaufer as a duo throughout the country. Stephen has authored ten books, four CDs, and 16 instructional videos.

Most recently, he has been teaching hundreds of students around the world via dulcimerschool.com.

Spotify playlist of the concert repertoire and similar songs